Dudu Garcia: A New Topography
⠀⠀⠀⠀⠀⠀⠀⠀⠀
Dudu Garcia lives and works in Rio de Janeiro, a place not easy to describe yet perfect for the expression of personality. Garcia adjusts his image, according to his mood, yet art is what he has described to me as “a vital necessity.” Like Yves Klein before him, Garcia sees painting very much as a physical act that springs to some degree from martial art, a noble struggle for perfection set within the structural laws of composition, but also the need to provide a reflection of his mind’s eye through the dexterous mix of matter. Jackson Pollock could also be mentioned, while Garcia cites Anselm Kiefer and Lucien Freud; whatever their differences, all four august exemplars revel/revelled in the extreme limits of texture conceivable within two dimensions. Despite the predominant use of such profoundly natural materials as stone, concrete and brick powder, even moss, the work also reflects the industrial world, a logical extension of the context of his studio – part of a huge, disused chocolate factory near the city’s centre – in the use of petrol and chemicals on the paintings and the plastic tiling and other synthetic elements often affixed to the canvas. A meeting, or collision, of opposites – natural/artificial – provides the density required to enter the picture frame, yet the overwhelming feeling, for me at least, is as if the subject, the origin of the work, had been extracted from some hitherto unknown planet with the aid of a benevolent satellite, giving the artist the chance to create his own macrocosm, first recorded and then cut and positioned like a fragmentary jigsaw puzzle on the canvas, those areas left free a reminder, as the Irish say, of the importance of “being noted by absence.” The creation of such an enriched texture, physical and implied, allows the constraints of two dimensions to return to the mysterious, abstract possibilities of three, and offers the observer a world that is unique, imagined, illusory. In such a way the interpretation of surface, both distant and intensely personal, is teased into existence by Garcia’s wholly original perspective. We who observe this new topography so generously established must remind ourselves that, if art is a journey, we need neither map nor baggage, simply the desire and the ability to lose ourselves to our imagination in order to travel without limitations.
⠀⠀⠀⠀⠀⠀⠀⠀⠀ 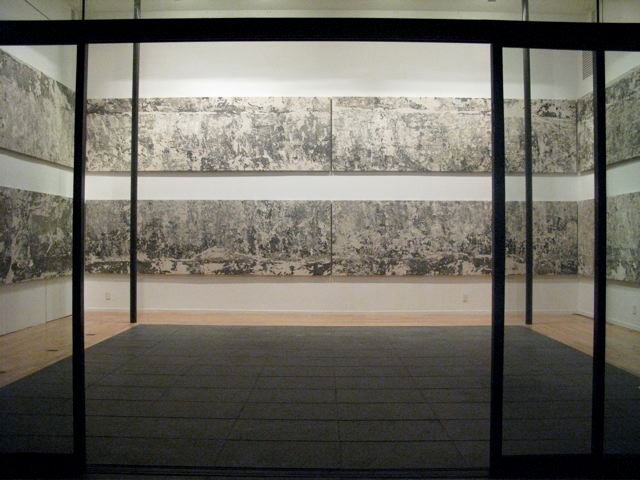